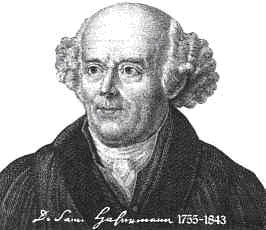 "The physician’s highest and only mission is to restore the sick to health, to cure, as it is termed."

Samuel Hahnemann
(1755-1843)
Homeopathy as we know it is about 200 years old. Back then, the German doctor Samuel Hahnemann discovered that kinabast (=quinine) – at that time the most efficient remedy against malaria, when given to a healthy person was causing complaints, which corresponded largely to  the complaints of malaria. Hahnemann continued to carry out his experiments testing a wide range of natural substances. He called this principle of healing 'Homeopathy' which is derived from the Greek words 'Homoios', meaning 'similar' and 'Pathos', meaning 'suffering'. The symptoms, which a substance can cause in a healthy person, can also cure a sick person with the same symptomatology.

In Homeopathy we call this principle the 'Law of Similars': SIMILIA SIMILIBUS CURENTUR (or: likes are to be cured with likes).
During his numerous experiments, Hahnemann came to the conclusion that only one homeopathic remedy can be administered in a given situation or period.
Homeopathic remedies are not meant to treat certain diseases, but patients. The homeopath sees a human being as a whole of body, mind and soul. He will search for the most appropriate remedy suited to the individual patient and his symptoms.

Still now 'Law of Similars' is the basis of Homeopathy and is confirmed in practice every day since more than 100 years.

Homeopathy works in a totally different way than conventional medicine. In a way you are used to get different medicines for several complaints – like for example a tranquilizer or an ointment when you have pain on your elbow or itching in your eyes.

With homeopathy you get only one remedy, which ameliorates all your complaints at the same time. The homeopath treats the patient as a whole: this includes mental, emotional and physical symptoms. He chooses the remedy, which matches best with the individual patient with the totality of symptoms. Homeopathic remedies are made of plants, animals and minerals.